Graham Baylis was born in 1957, and has, therefore seen the birth of the Internet and experienced at first hand just how it has changed the world we live in.

His first exposure to Computers was in the 1970’s when he bought a Sinclair ZX81, progressing over time to the Amstrad CPC 464. However, it was not until 1983 that he really started using them in earnest, programming computers in Fortran and Cobol whilst taking an HNC in Computer Science. At that time, programming meant using cards and punched tape. My how things have changed over the years…

The first job he held which involved computers started in 1984, in the DHSS in Bootle on Merseyside. Whilst working in a section dedicated to bringing computers into every office in the UK, Graham produced a number of computer based systems to assist in the day to day operation of the department.

In 1987 Graham transferred to the CCTA (Central Computer and Telecommunication Agency), part of the Treasury department. Here he ran the help desk and marketing programme for what was then quite new, that of an electronic mail system, complete with secure connections to allow for better interdepartmental communication, IDEM. He was promoted later that same year and later took control of the section until a successor for his boss (who had left the Service) to be appointed. During this time he represented the department in Brussels and at the Institute of Electrical Engineers.

In 1988, he left the Service and joined AT&T in Redditch as a Project Manager, assisting their rollout of a brand new form of communication system (one that at the time you may well have used without knowing it, if you had booked a holiday at a high street travel agent). His other jobs at AT&T included Logistics, where he created a stock control system that ensured that the right equipment was available. He was also appointed Information Manager, where he first became involved with the Internet. Seeing the potential, he wrote a short paper and submitted it to mangement, getting approval to set up an Intranet for the installation department. This soon became the ‘go to’ place for information and was well recevied by all.

In 1999, after leaving AT&T, Graham set up his own Internet Company, initially as a web designer, later moving the focus of the company, first to Google Adwords (Pay per click – Search Marketing) and later to SEO. Since then he has worked with a whole range of clients, from the small one man band, to large multinationals.

Mostly self trained, he has attended numerous webinars and courses, his most recent certification being from SearchEngineNews:- 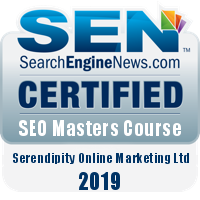 In conclusion, he is proud to be running, in his view, the best SEO company in Hereford, possibly the only one that concentrates soley on SEO and has 19 years experience…

This site uses cookies. By continuing to browse the site, you are agreeing to our use of cookies.

We may request cookies to be set on your device. We use cookies to let us know when you visit our websites, how you interact with us, to enrich your user experience, and to customize your relationship with our website.

Click on the different category headings to find out more. You can also change some of your preferences. Note that blocking some types of cookies may impact your experience on our websites and the services we are able to offer.

These cookies are strictly necessary to provide you with services available through our website and to use some of its features.

Because these cookies are strictly necessary to deliver the website, refuseing them will have impact how our site functions. You always can block or delete cookies by changing your browser settings and force blocking all cookies on this website. But this will always prompt you to accept/refuse cookies when revisiting our site.

We fully respect if you want to refuse cookies but to avoid asking you again and again kindly allow us to store a cookie for that. You are free to opt out any time or opt in for other cookies to get a better experience. If you refuse cookies we will remove all set cookies in our domain.

We provide you with a list of stored cookies on your computer in our domain so you can check what we stored. Due to security reasons we are not able to show or modify cookies from other domains. You can check these in your browser security settings.

We also use different external services like Google Webfonts, Google Maps, and external Video providers. Since these providers may collect personal data like your IP address we allow you to block them here. Please be aware that this might heavily reduce the functionality and appearance of our site. Changes will take effect once you reload the page.